Hari Om! Welcome back to the voyage inward. 🙂

Today’s blog is a reminder to myself and many of us – who want to do so much, do a lot,  leave some things halfway and keep going with some others and sometimes get frustrated due to dead ends! Read on. 🙂

“What is the why behind everything that you do? When we know this in life or design it is very empowering and the path is clear.”

On the path of life, each of us have various destinations we wish to reach at different points in time.

But how many times do we pause to ask, “Why am I doing what I am doing?”

How many times do we pause to look at all those incomplete tasks we had begun with great enthusiasm and ask, “Why did I let all that drop off?”

The answer lies in how strongly we hold on to the “Why” of what we do! If we lose sight of the reason behind what we have started, ultimately we lose sight of both the path and the goal. A strong sense of purpose and unbreakable determination can keep us walking without tiring!

If we look carefully at every personality who has achieved or have been achieving their dreams against all odds : We will know that they never lose sight of their “Whys”. What would happen to a company that goes against its vision and mission? It will fall into absolute chaos isn’t it?

Lord Krishna knew the reason for every step in his life : to uphold and restore Dharma throughout the land of Bharatavarsha. Thus, he remained unperturbed in the face of every obstacle, even if they came from his own kin.

For, “when you know the why behind what you do, you can bear with almost any how” says one of those people who inspires me!

That is – when you remain steadfast in the principle that drove you to chase a dream, you can tackle every challenge that arises!

A simple word – “Why”. But such layers of thought behind it.

In today’s times of constant distractions, it becomes all the more important to stay in tune with the essence of our goals, to keep going back to why we began what we did.

A good trick in the book would be to write your purpose down and keep re-visiting it from time to time. That is what I have recently discovered is an extremely fulfilling and reflective exercise which led to this blog piece.

For example, if you are a dancer caught in self-doubt, go back to understanding why you are practicing this art form.

If you have hit a roadblock in a new venture, remind yourself about your passion for it.

When that energy floods your veins again, when the fire of purpose lights up your lives – no obstacle is too big and no victory too small. Every moment becomes a celebration, every goal worth striving hard for!

Just remember, to know why! 🙂

See you Next Sunday, 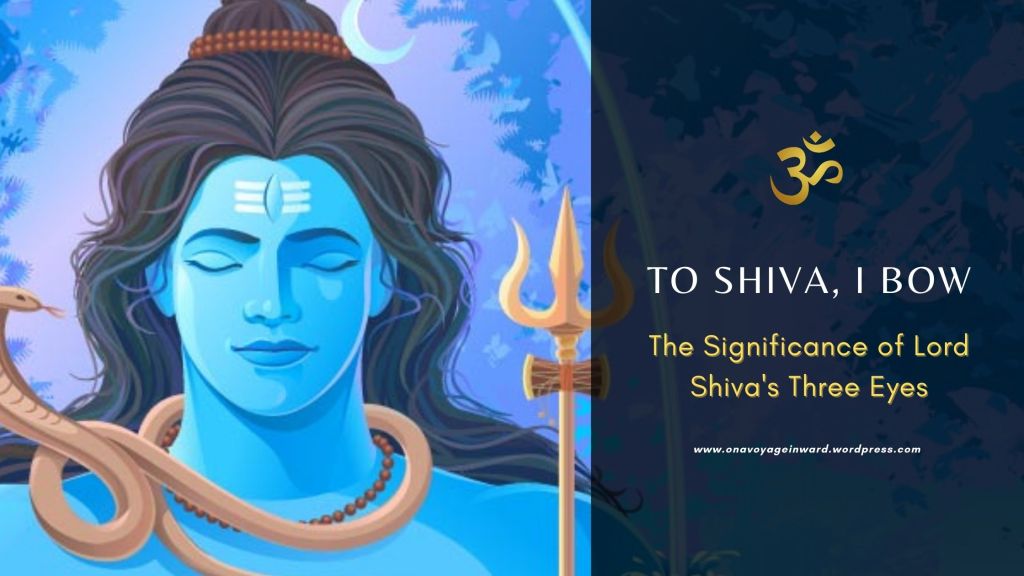 Hari Om! Welcome back to the voyage inward. 🙂 Thank so much for all the love and encouragement you shower upon this blog! It helps me become a better instrument. 🙂

In Sanatana Dharma, there is an ocean of knowledge consisting of cultural traditions analogies, statements, tales and symbolisms to hold the seeker’s attention and curiosity for a hundred lifetimes.

One such form that enchants me is Lord Shiva’s. Imagine my joy which my Guru, Swami Tejomayananda started discoursing on the Vedasara Shiva Stotram composed by Shri Adi Shankaracharya earlier this week! 🙂

Today, I am going to be writing about one aspect of Bhagavan’s form. The Lord ‘s fascinating three eyes.

Hope you enjoy the read! 🙂

This is a verse from the Vedasara Shiva Stotram –

विरूपाक्ष – The One with Unique Eyes

“Trinetra” or the One with three eyes – is an epithet that we immediately associate with Lord Shiva. But what do these three eyes signify? This is what I very joyously discovered this week during Guruji’s talk. 🙂

Lord Shiva has the sun, the moon and fire for his three eyes – with fire being the third one at the centre. Weirdly fascinating is it not?

Now for someone who may not know, the third eye might be taken as some appendage or a crack on the forehead – what a scary sight to look at!

But it is nothing like that. In fact, it is a very subtle symbolism to indicate an awakening to Higher Consciousness. With the light of these three eyes, He illumines the entire world!

Let us go back to the famous story associated with Shiva’s Third Eye. After his consort Devi Sati immolates herself due to her father’s insults healed upon her husband, Shiva destroys Daksha and shuts himself up in a cave, withdrawing within – away from the anger and sorrow caused due to Sati’s immolation.

In the meantime, Sati re-incarnates as Mother Parvati – an apt epitome of the seeker. For she upon the advice of Sage Narada undertakes severe austerities to obtain Lord Shiva as her husband. Much like a seeker undertakes in his quest for knowledge – the source of which is Shiva Himself.

The Devas exasperated on seeing the Lord remaining oblivious to the Mother’s penance approach Kamadeva (The Lord of Desire) who from behind a tree shoots one of his arrows at Shiva seated deep in meditation.

A furious Shiva, his contemplation disturbed, opens his Third Eye and burns down Kamadeva into ashes much to the shock of the Devas and Rati, the wife of Kamadeva. They turn to the Mother Parvati who is Shakti – the other half of Shiva.

The Lord having calmed down and heard Parvati’s arguments and the pleas of Rati, told her that although he cannot restore her husband ‘s entire form – he will exist in the mind of every human being. Now, is not desire a part of all of us?

It is quite a beautiful sight to watch this episode being performed in dance dramas!

Kamadeva represents the constant pulls of desire in our own minds. Desire by itself is never a problem, it is our attachment to it, our insistence upon its fulfillment – that causes great sorrow and anger.

It is this self-annihilating attachment that Shiva destroys upon awakening to the state of Higher Consciousness.  It is this constant pull, these sorrows that are destroyed when we come to realise and abide in our true nature.

The next time you think your emotions and desires are overwhelming – try surrendering them at the feet of Shiva – a path to progress will automatically open itself up.

Thus Lord Shiva’s Third Eye – is the eye of Wisdom and Courage. It represents the ultimate inner awakening – where one transcends the realm of the known and enters the Unknown. Where there exists nothing but life as It is.

One technique that has been taught to me in Yoga class is to focus on this pivotal center and chant Om – the vibrations felt are deeply calming and blissful.

The Lord ‘s right eye is the sun – which is symbolic of brightness and hope. Doesn’t sunlight bring with it a new beginning? Doesn’t it lighten up the entire world around? This is also the eye of justice, of objectivity.

Thus in our lives, it represents the ability to know and do what is right – to fulfill our potential and serve the world.

The Lord ‘s left eye is the moon – which has a soothing and re-assuring effect on all of us. It is also symbolic of how beautifully the nurturing aspects of creation work.

In our lives, it represents the ability to sympathize, to care and to uplift.

Beyond them – lies the Third Eye, the opening of which bestows complete inner integration of the mind and intellect and consequently an awakening to your true Self.

This is the Eye of Viveka or discernment – which helps us balance the objectivity of the right eye with the compassion of the left and thus function in this world in perfect equilibrium – just as the Lord does.

To truly know, to have true clarity and vision, to become truly alert to each moment, you must always look inward. There lies all wisdom. There resides the infinite power of Lord Shiva.

Here is the Playlist link to the Talks on Vedasara Shiva Stotram – https://www.youtube.com/playlist?list=PLm6DKuwwu5zrUjfKu0UDvtm3ZbKXuuuq0

And a melodious bhajan on Lord Shiva for you to listen to – https://youtu.be/WBzeTz_UpQ4

See You Next Sunday,